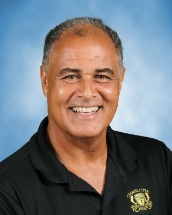 I was born and raised in South Plainfield, NJ, and graduated from South Plainfield High School in 1979, where I was an All-State Athlete in soccer, wrestling, and track. I finished in the top 5 in the Mid-Atlantic region (Maine to Virginia) in wrestling, but, while in college, a knee and shoulder injury ended my wrestling career. I have been married to my wife, Sherri for 32 years and have two grown sons, David and Michael. I began coaching wrestling, soccer, and track & field in the early 1980s. I coached high school wrestling teams and track & field teams to NJ State Titles and achieved top-four status in soccer. After moving to Delaware in 1989, I coached recreational and competitive soccer teams for over 20 years. I became a member of the Board of Directors at Kirkwood Soccer Club as well as Tournament Director. I assisted in coaching my son’s soccer team to four state titles while earning a national soccer coaching license. While living in Delaware, I worked in banking and developed a very successful soccer training business for individuals, small groups, and teams in Delaware and Maryland. Due to downsizing and my wife’s multiple back surgeries, we made a decision to move to Florida. We have been here for one and a half years. Prior to my current position, I was employed at Punta Gorda Middle and coached Charlotte High School JV lady Tarpons soccer team. I also became involved with the Charlotte County Soccer Federation and coach the U-16 boys’ travel team. I am looking forward to a long career at Charlotte Prep developing high quality, inclusive sports programs.